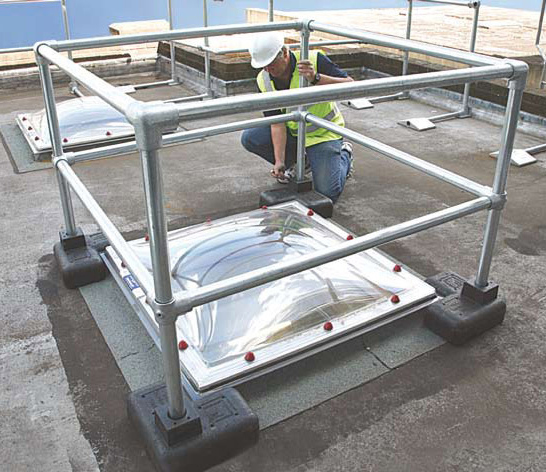 The smoke and heat evacuation systems (EFC), are made up of natural or mechanical ventilation of rooms with manual or automatic operation, sometimes coupled with smoke curtains are covered in Directive 89/106/EEC, adopted in Italy by DPR n. 246 dd. 31.04.1993. This standard is harmonized as a technical specification adopted by CEN (Comite Europeen de Normalisation), in particular, that is in compliance with Technical Committee CEN / TC 191 named “Fixed to fight the fire “. AI operates inside a working group that is developing the Community rules on EFC systems and technical specifications of all its components.

The contents of the UNI 9494 are in perfect harmony with the provisions of the projects of the CEN / TC 191. The EFC are usually constructed according to the latest European technical standard UNI EN 12101 transposed into Italian and published as UNI EN 12101-2-2004.

These systems are used to extract the fumes from the airlines concerned and the heat generated by a fire, helping to contain the lateral propagation and to create under the state of fumes in the suspension area free from fumes themselves, thus guaranteeing to maintain mackerel from combustion products evacuation and escape routes and access for fire-fighting operations.

It also helps to delay or prevent flash over (generalized fire) and to reduce the risk of collapse of the structural elements of the area due to the increase of temperature.

Obviously their limit lies in limiting the use that is reserved for single-storey buildings and / or the top floor of multi-storey buildings, it is not possible their use in intermediate floors.
The purpose of the system is EFC may therefore summarize thus:

The effective action of the system of smoke and heat evacuation occurs in the first stage of the fire, with temperatures up to 300 ° C. It therefore emphasizes that the EFC systems, like all other fire protection systems, shall come into operation in the first minutes after the outbreak of the fire. The UNI 9494, already in the definitions and terms, introduces the compartment (A), sector limited by building walls and ceilings resistant to fire and the compartment ceiling (As), area between two walls or between smoke-tight two structural elements similar (for example beams).
Paragraph 5 of the UNI 9494 defines how the system should be designed.

The EFC must meet a number of features that the manufacturer must satisfy. Every single EFC has its own opening command with an independent source of energy and thermal release at 68, 93 or 141 ° C. The autonomous source of energy is a cartridge containing 30 g of CO2. Each group of EFC, group that covers a compartment or a part of a compartment (generally areas from approximately 1600 m2), has its own command to open fire. This remote control is the most important because it provides ventilation fire, evacuation of smoke and hot gases from the area under fire.

In paragraph 6 of the UNI 9494 parameters that are taken into consideration are the speed of propagation of the fire, the expected duration of the fire itself, the geometry, ie the compartment.
With the first parameter you want to consider the amount of smoke and hot gases produced. Do not require the fire load, but the speed with which the brazier widens. And you give three hypotheses:

It is not easy to use the low speed, because they are just a few plastic packaging to bring the case to the average speed. The speed is high in products and substances with rapid combustion, almost all players. The second parameter, the development time of the fire, is given by the sum of the alarm time (O min. With automatic smoke detection, 5 min. In the presence of men) and the time for action by the fire brigade, 5 min. for internal team, 20 min. for external team. It keeps tripping time lowest, 5 min., If any automatic shutdown as the sprinkler.

The trip time is given by the external team of firefighters. In general, it is estimated 1km = 1 min., In areas with difficult traffic, it is advisable to confirm the time from the provincial command.

The third parameter analyzes the environment, the compartment, the surface, the shape and the height of the cover, the presence of smoke curtains that create compartments ceiling (useful tanks of smoke and hot gases), the free height from fumes that must be given (half medium height, not less than 2 m).
The determining factor for the good functioning of a system of evacuation of smoke and heat is the correct sizing of the evacuator; The dimensioning of a smoke extractor and heat depends on the thickness of the layer of smoke that can collect in the upper part of the ceiling.
The smoke and heat must be distributed more evenly as possible within the area to be protected. In calculating the number of evacuators to install is always preferable to adopt a larger number of apparatuses of more contained dimension rather than the reverse.
In cases where zones of the area to be protected are partially separated by walls, beams, currents or other building elements, must be installed a smoke extractor for each zone.
In environments where there are ceilings that can lead to the accumulation of heat, it is necessary to provide additional openings.
With the G.D. obtained and with the clear height y from fumes (or yc) will determine the coefficients of sizing, as a percentage of the surface of the compartment A.

As regards the system of this individual opening is formed by a perforation device, installed close to the cylinder actuator. The fusible link is normally calibrated to 68 ° C, to achieve this temperature explodes, releasing the needle that pierces the bottom of the canister of carbon dioxide (CO2) installed. The compressed gas unlocks the EFC and triggers the piston which causes the tilting of the upper frame. The mechanical lock prevents accidental closure after opening, even in presence of strong wind.

You can also build the facility connecting groups with air line or power line. In both cases the line must be resistant to fire and open all of the EFC section under the fire.

The energy autonomous, in the case of pneumatic connection, is given by a cylinder of C02 (carbon dioxide). In the case of electrical connection, on the line runs a signal that activates a firing pin for each EFC; this breaks the ampollina thermosensitive and frees the CO2 cartridge mail nell’EFC. The firing pin is moved by a pyrotechnic charge type or by a magnet. In both cases, the absorption is about 0.3 A for EFC.

In the case of the pneumatic circuit is consumed only the CO2 cylinder of the remote station. The CO2 cartridges and ampoules of each heat-sensitive EFC remain intact.

The electrical circuit needs a remote control unit able to send a signal of 24 V DC and open all EFC connected. We consume all the cartridges and ampoules with the heat-sensitive of the EFC group and the pyrotechnic charge.

There are several types of EFC for simplicity can be reduced to three basic types according to the system of opening:

The more common the domes are equipped with a device for the manual opening or mechanized in association with fire detectors in single mode or integrated with a fire detection system. The opening must be guaranteed in a time not exceeding 60 seconds.

Typically, the sensor is a thermal detector with fixed threshold or rate of rise type.

Each EFC must be as required by EN 12101 together with a label which lists the following significant technical data: