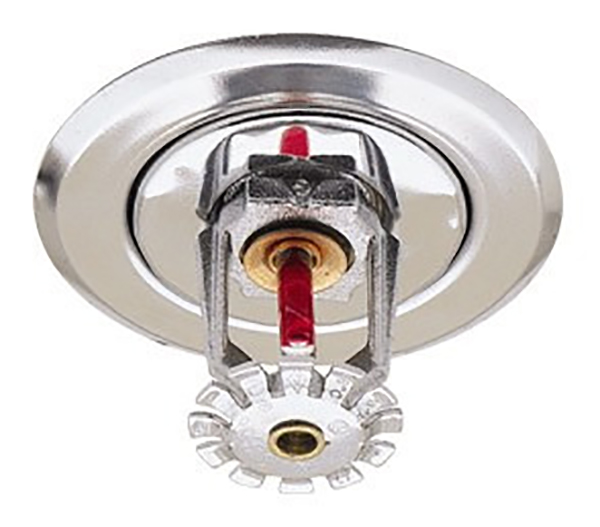 The shutdown systems to rain, known as sprinkler systems are the most widely used systems in the world for the fire protection of civil and industrial business. The sprinkler system is constituted by a pipe network constantly under pressure of water (wet systems) or air (dry systems) to which are connected the sprinkler heads closed by the heat sensitive elements that distinguish them. The network of pipes is connected to a water source having the function of ensuring the supply of water to the sprinklers, with characteristics of flow rate, pressure and duration predetermined. The basic characteristic of the sprinkler system is its fully automatic operation, thus requiring automatic water supply.

The sprinkler system bases its success on the simplicity of its operation, the sprinkler head it brings together in a single element, the function of the fire detection and early intervention of law enforcement.

The first examples of sprinkler systems (which means to sprinkle drops) date back to the early nineteenth century. In 1878, Mr. Grinnell built its first modern sprinkler, sprinkler called Grinnell, practically giving shape to the sprinkler so as we know it.
With the development of technology sprinkler begins almost simultaneously with the preparation of technical standards. NFPA 13 is 1896. European standards of English FOC, the German VdS and Italy for the Italian Concordat fire, are of the 50s and 60s and are all original insurance.
The sprinkler system bases its operation on the element essential constituent which is precisely the sprinkler head. The mechanisms of detection consolidated are of two types:

In the long run the system with sprinkler head bulb has proved the best and cheap.

All sprinkler heads are calibrated in the same way as with ordinary activation temperature (57 ° C), intermediate and high (343 ° C). The calibration of the sprinkler heads is a key feature in the definition of a security, and as related to the environment, the type of risk, building and ceiling elements.

Another important element of differentiation is the shape of the deflector, already consolidated in the shapes of heads to be mounted upwardly (upright), downwards (Pendent) and conventional.

Apart from the two types of sensing element and the shape of the deflector, the sprinkler head has remained unchanged for nearly a century when in 1980 a number of studies have allowed to develop heads intervening on parameters such as the shape of the jet, the size of the drops and the response time.

This is how the sprinkler heads specific for the environment to be protected and the type of risk:

The sprinkler heads Large Drop have been studied for fires where it develops a large amount of heat and a high progression of the flame as in fires of combustible goods stacked, in which the arrangement of the goods favors the propagation upwards of the flame and the consequent increasing heat release. These sprinkler heads having the orifice plus (5/8”) providing a water flow rate increased and produce a considerable quantity of droplets of large size, capable of penetrating the hot fumes ascending.

The sprinkler heads ESFR (Early suppresion Fast Response) are the expression of the highest and complete development of the heads Large Drop. The openings are variable ¾” to 1 “. They are suitable for storage areas with storage of more than 10 meters with positioning ceiling without installing intermediate levels of scafalature.

Residential sprinkler heads are based on two main criteria: the heads are rapid activation due to the sensitive elements of mass and provide a very limited form and distribution of the water jet that lends itself well to the protection of residential areas.

Sidewall sprinkler heads are distinguished jet side, to be installed in the vertical position, facing up or down, and or jet heads side with horizontal mounting. In all these cases are able to guarantee the same performance of heads installed at the center of the room. Are in fact installed where it is not easy or it is not even allowed the positioning of heads in the center of the premises.

One of the characteristics of the sprinkler, which must be defined by the user, and the surface finish of the same. From the aesthetic point of view there are several solutions; the sprinkler heads may be variously chrome or painted, can have a rosette of recessed finish or even be fully recessed in the false ceiling (Recesed and Conceleaded).

Sprinkler systems sprinkler damp are those more common; pipes are constantly filled with water under pressure and the opening of one or more heads causes the immediate release of water from the plant. At the same time a control valve that just wet, it shall activate the alarm locally, through water motor, and to transmit the alarm signal to a remote manned by pressure.

Sprinkler systems are used in dry cold areas, where it is feared the water from freezing in the pipes. In this case the pipes are held in constant air pressure, thanks to a special feeding device (compressor); the opening of one or more heads causes the immediate release of the air from the system which then gradually loses pressure. A control valve in hydraulic balance, normally held closed by the pressure of air, is operated, allowing water to enter the piping and to reach the heads open, flowing out in turn. For these systems must keep in mind that there is a time delay due to the time required for the outflow of water from the pipes in part overcome with acceleration systems to be installed in correspondence of the control valve. The installation must be treated very carefully to avoid leakage and condensation that can freeze and block the hydraulic components of the system, in which case it is possible to install drainage devices in all terminals of the system.

The sprinkler systems Preaction are particular systems that require, for their activation, the intervention of an additional system, independent from the main system, which detects the actual existence of the fire before allowing the plant sprinkler itself to intervene.

The control group of a sprinkler system Preaction, unlike the control groups of sprinkler systems for wet and dry, is a closed group, which requires an active action to be operated. Thus, while it reveals a system of greater accuracy intervention, thanks to the confirmation of the presence of fire being given by the detection system, however, takes away at the level of reliability and simplicity because, requires the intervention of actual another system, with more then a chance of failure that is known to be the sum of the probability of failure of the two systems. The sprinkler systems Preaction differ mainly in systems with simple interlock and double interlock, depending on the detection system chosen; electric, pneumatic and electronic.

Another important element is the water supply of the sprinkler system. European standards in the value of the duration of the water supply is set so unique and rigorous with respect to classes of reference in U.S. legislation has granted some discretion.