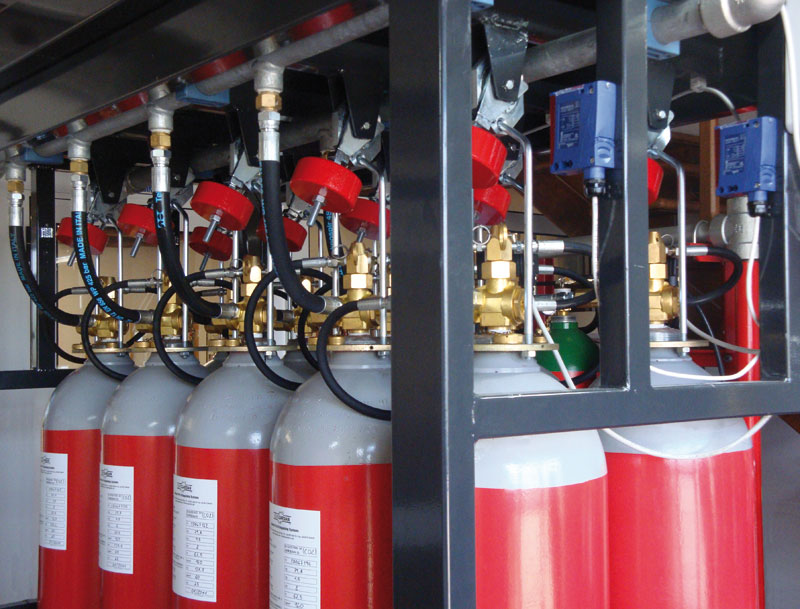 The shutdown systems to CO2 Carbon Dioxide (Carbon Dioxide) are part of the clean agent systems, since the carbon dioxide gas that is stored in cylinders or tanks in liquid form and which is delivered in an environment by means of special nozzles which cause vaporization.

Traditionally, the fire-extinguishing systems in carbon dioxide are treated separately from other systems, probably due to the particular chemical behavior – physical CO2, due to the possibility of direct gasification and solidification (sublimation) without passing through the liquid state.

Since the carbon dioxide a substance completely oxidized, not involved in the combustion, but reduces the oxygen content in air and smothers the fire. In addition, it is not conduct electricity and leaving deposits, is an effective means for extinguishing fire of electrical and electronic equipment under tension. When delivered directly to a surface burning, also exerts an action of cooling in addition to that of suffocation, it is recommended the use of equipment and materials sensitive to sudden changes in temperature. Being volatile, outdoor use, and is effective for small fires only.
The use of carbon dioxide is not recommended on equipment and materials sensitive to sudden changes in temperature.

The recent ban on Halons, they did back current use of carbon dioxide in air off.

In summary the extinguishing system in carbon dioxide is constituted by a storage (cylinders) of CO2 under pressure connected through valves to a system of pipes that lead to the destination (collector and distribution piping). The extremity of said pipes there are nozzles through which the CO2 is discharged onto the compartment or object to be protected. The CO2 downloaded expanding turns into ice.
Inside the pipes conveying (collector) and distribution are themselves instead to form conditions of temperature and pressure for which it is located both in the presence of liquid or vapor, this fact makes complex the calculation of the pressure drops in the pipes and explains the difficulty of design.

The cylinders are only partially loaded with liquid, to allow the expansion due to temperature variation. For safety, the cylinder valve upstream of the intercepting device, there must be a rupture disk that ruptures and download the cylinder if the pressure inside exceeds the value of stamp.

The colder the CO2 in the cylinders more time is necessary for its evaporation, according to the standard NFPA 12, the temperatures of the groups of cylinders must be maintained between 0 and 50 ° C in order to keep the normal pressure variable between 55 and 60 bar.

The plants with low pressure systems are used for large size using refrigerated tanks; in these vessels the CO2 is maintained, by means of a refrigeration system, at a temperature of – 18 ° C, which corresponds to a pressure of 20 bar.

The applications of systems carbon dioxide is multifactorial and in more localized applications on machines using flammable (rotary presses), for which these systems are still the most used.
The main limitation for the use of the system is due to the danger of CO2 that, at the concentrations of use, is dangerous for the occupants as it makes the air unbreathable for insufficient oxygen concentration. This has made at least on a national level, virtually unusable in all areas normally occupied by people.
The extinguishing systems in carbon dioxide can be of the type:

Plants off CO2 total flooding consist of the following parts:

System off carbon dioxide
Are generally operated automatically by a fire detection system, which sends a signal to the control station, from which then part the opening command of the cylinders. In cases where the extinguishant is released into environments where access can oe normally present staff, the opening command provides an automatic delay of predetermined download and reported by devices of acoustic and optical warning to allow the abandonment of the premises.

The control station, simultaneously with the opening command of the cylinders, sends a stop command which makes the systems of ventilation of the room concerned and makes close the openings, such as dampers of the ventilation ducts, windows and the like, this to achieve and maintain the degree concentration in local dall’estinguente required. In fact, for these systems to total saturation sealing of the premises is of paramount importance. The openings localized upwards within certain limits does not affect the saturation because they help to expel air; the inflow of cold CO2 first creates a depression but subsequently the mixture air – carbon dioxide absorbs heat from the walls and one can have an increase in volume if the environment is important pond.

For each group of cylinders there is one or two cylinders called “pilot “, whose opening is controlled directly from the control station, the gas discharged from these cylinders, in addition to going to the collector goes also to actuate the actuators that make open all other cylinders of the battery.

Plants off CO2 to local application
The CO2 extinguishing systems for local application are used where the risk of fire is localized to devices whose dimensions are much smaller than those of the environment that contains them, and are of two types: