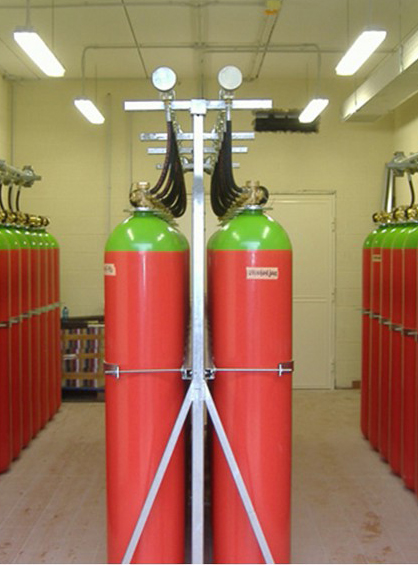 The inert gas extinguishing systems are to be considered as clean agent systems, the law that oversees the use of this extinguisher is the NFPA 2001, ISO 14520-14, ul 2127 and UNI 10877/14. Unlike Halon 1301 which intervened on the fire by chemical means, the extinguishing INERT extinguishes the fire by reducing the flame temperature below the level needed to maintain combustion, since it reduces the oxygen concentration, and increasing the thermal capacity of the air.

The extinguisher uses inert gases normally present in the atmosphere, the argon (Ar) and Nitrogen (N ²) in the mixture, the two gases are chemically inert, colorless and non-corrosive. Also not forming thermal decomposition products in contact with the flames are exempt from problems of environmental compatibility.

Plant shutdown inert gas IG 55 The principle of operation of the inert gas and that of the saturation of the environment (total flooding); this system of operation has the great advantage of not having to worry about the location of the risk materials, nor their conformation because it creates a level playing field throughout the environment. As a result of the descending air mixtures – extinguishing agent is important to indicate the maximum height at which you can find combustible materials covered by the security.

Another essential parameter is the evaluation of the volume to be protected in order to fix the amount of gas to be used. The characteristics of the environment to be protected are fundamental for a correct design of the system, so that the NFPA expressly provides leak test the Door Fan Integrity Test, and the closure of all openings with automatic frames and the immediate stop Ventilation systems are critical to the effectiveness of the system.

In particular small areas where there are numerous openings more or less sealed, where can exit the extinguishing gas, it is common to use double release systems. After the first download, follows a download additional “maintenance ” which adds the gas that is lost through the openings so as to maintain the concentration on the parameters required for shutdown.

With regard to the concentration limits and people exposure to inert gas extinguishing is made to the U.S. EPA (Environmental Protection Agency) and the Protocol Reinhardt The decisive parameters are:

NOAEL-NO Observable Adverse Effect Level (maximum exposure to the agent or extinguishing concentration, which does not show any side effects;

LOAEL Lowest-Observable Adverse Effect Level (least amount of exposure to the agent or extinguishing concentration, at which side effects are encountered

Therefore it is clear that in the case of areas normally occupied by personnel, one can not reduce the oxygen concentration to a value less than 12% if you want to allow the human presence inside the space concerned by the discharge extinguishing for 5 minutes .

The proliferation of new type of clean agent fire extinguishing gas Inert gas Haloncarbons and led the NFPA 2001 to introduce a new testing protocol compatibility of the toxicological called PBPK – Physiologically Based Pharmacokinetic model, which considers the maximum permissible concentration in the blood of ‘ extinguishing agent and the time needed to reach it.

In summary the extinguishing system in inert gas is constituted by a storage (cylinders) under pressure connected through valves to a system of pipes that deliver to destination (collector and distribution piping). The extremity of said pipes there are nozzles through which the gas is discharged onto the compartment or object to be protected.